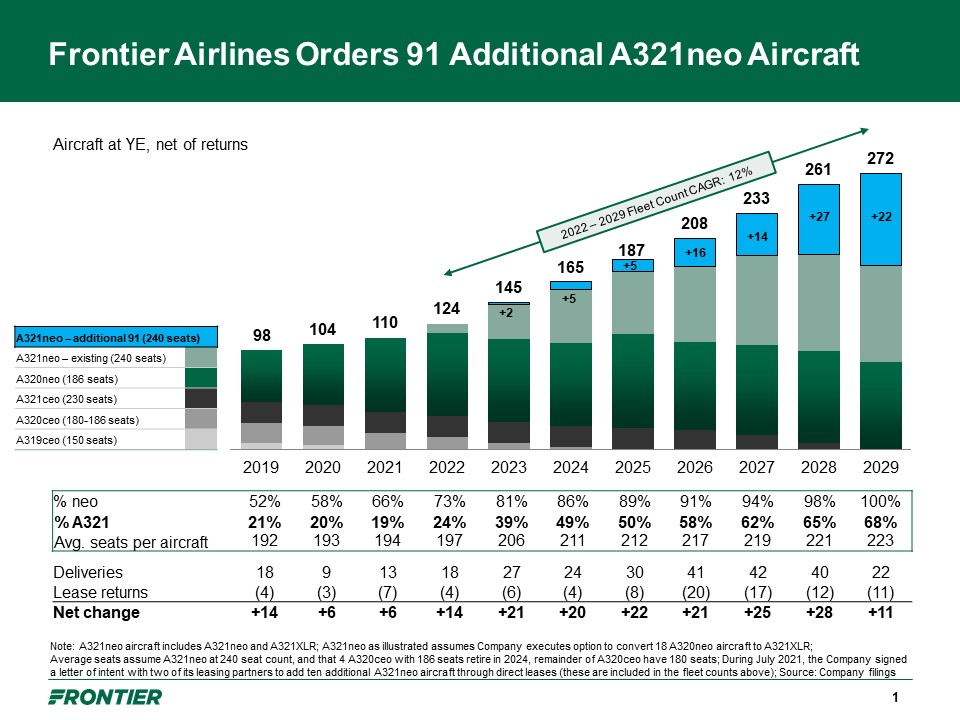 “These additional A321neo aircraft will enable us to triple the size of the airline by 2029,” said Barry Biffle, president and CEO, Frontier Airlines. “We are already America’s Greenest Airline with an existing fleet that is 43 percent more fuel efficient, on average per seat, than other U.S. carriers. The A321neo is expected to deliver nearly 120 ASMs per gallon, further advancing our industry-leading environmental efforts while debunking the myth that being green is an expensive investment only achievable in the future.”

The new aircraft are scheduled for delivery between 2023 and 2029. They are in addition to Frontier’s existing orderbook of 143 aircraft to be delivered between 2022 and 2028, bringing the airline’s total aircraft on order to 234. By the end of 2029, Frontier’s total fleet size is expected to include 272 aircraft.

"Frontier has truly capitalized on the efficiency of the A321neo to offer passengers a flying experience that is both affordable and also kinder to the environment," said C. Jeffrey Knittel, chairman and CEO of Airbus Americas.

Frontier currently has 112 aircraft in its fleet. Of the 234 new aircraft on order, 76 are A320neo aircraft and 158 are A321neo aircraft. Eighteen of the A320neo aircraft include conversion rights to A321XLR aircraft. The Company currently flies to more than 100 destinations within the U.S., Mexico, Caribbean and Latin America and is undergoing significant expansion within both its domestic and international route networks.

About Frontier Airlines:
Frontier Airlines (NASDAQ: ULCC) is committed to “Low Fares Done Right.” Headquartered in Denver, Colorado, the company operates more than 100 A320 family aircraft and has the largest A320neo fleet in the U.S. The use of these aircraft, Frontier’s seating configuration, weight-saving tactics and baggage process have all contributed to the airline’s average of 43 percent fuel savings compared to other U.S. airlines (fuel savings is based on Frontier Airlines’ 2019 fuel consumption per seat-mile compared to the weighted average of major U.S. airlines), which makes Frontier the most fuel-efficient U.S. airline. Frontier is also committed to families enabling children 14 years and younger to fly free through the airline’s Discount Den travel club on qualifying flights. With more than 230 new Airbus planes on order, Frontier will continue to grow to deliver on the mission of providing affordable travel across America.